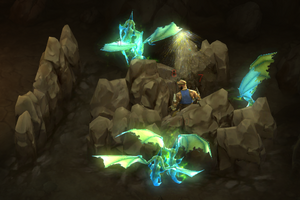 Walls being summoned by a group of Plague Carriers.

Monsters with Waller can summon earthen walls. The walls crumble after a few seconds and are impenetrable to ranged attacks with the exception of a few skills. Rare monsters will summon three walls at once arranged in a 'U' shape. Champion monsters each can summon one wall between them and the player. Both will use the ability periodically. It should be noted that melee skills can be used through walls by both party members and monsters.

The walls produced are harmless and the trait does not noticeably increase the power of Elites. They can seriously impede player mobility, to an extent that the player is unable to move for a period of time. Combined with high damaging traits or powerful monsters this can often lead to player death. Many players have lost high paragon Hardcore characters as a result of this trait.

Waller is a monster trait that was first discovered to exist in the Den of the Fallen Level 2 during the Diablo III beta. The reason for its existence in this area was because the monsters used to spawn at a considerably higher level than any other area in the beta content.