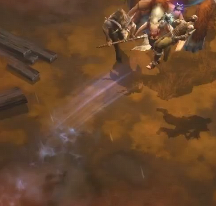 A Monk getting "vortexed" back to his death.

Vortex is a monster trait that first made its appearance at Blizzcon 2010 in the Diablo III demo. After Beta Patch 14, it was discovered to still be in the game in a previously inaccessible area.[1]

This trait grants the ability to forcibly pull in the player to the monster. It can be especially deadly for ranged characters and also interrupts any channeled abilities even at point-blank range. The monster does not need to have line of sight and there is no maximum range. The ability itself doesn't inflict damage but can be deadly when combined with abilities that require escape such as Frozen and Arcane Enchanted.[2]