Also known as the Viz-Jaq'taar or the Order of the Mage Slayers, Assassins are an ancient order originally founded by the Vizjerei Clan to hunt down and eliminate rogue magi within their own ranks. Employing secret disciplines to combat and resist the magical abilities of their elusive quarry, the Assassin's bag of tricks includes traps and other infernal devices, martial arts, and powerful mental abilities. Common people know nothing of the Assassins, but they are widely feared and respected by all who employ the magic arts.

Their main weapon are Claws or weapons that are attached to the hand such as Katar or Hatchet Hands.

Assassins are also highly adept at lock picking, allowing them to open locked chests without the need for keys used by other classes, freeing up precious space in the Assassin’s inventory for other items.

Natalya: "I've heard of the Black Book. My Order's code is based on many of its passages. If you find it, I will be greatly impressed." 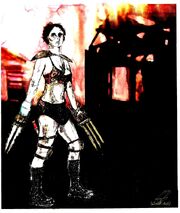