The Undead are one of the three types of monsters found in the Diablo series.

They are depicted mostly as typical Skeletons and Zombies. But, there are other more powerful undead creatures like the Wraiths and spell-casting monstrosities, the Oblivion Knights.

They are resistant to hack and slash weapons like swords and axes, but are very weak against blunt weapons like maces and scepters.

Some Paladin skills like Holy Bolt and the Sanctuary Aura are designed specifically to work against undead.

The Necromancer can summon undead monsters as well by using corpses.

The Diablo III class, Witch Doctor can also summon undead monsters called Zombie Dogs. They can be augmented by the Witch Doctor's other spells.

The Undead have been featured in the official Diablo III website with some lore: 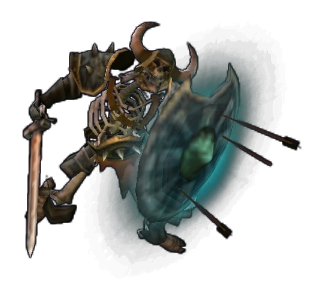 The undead are a pox upon our world, yet no one sees fit to look into their existence and find a way to rid us of them once and for all. How long until we are confronted by the terrifying specter of an undead army of skeletal warriors raised by some crazed sorcerer or would-be demigod? Do not let the scarce reports of skeleton attacks lull you into assuming we are safe; we are never safe from these unholy legions. They are coming, mark my words.

Despite the fact that skeletons seem mischievous or imbecilic, they are nothing to scoff at. We should neither dismiss them from our consideration, nor ignore the problem they represent. It is far past the time for serious inquiry into their exact nature. Since I am overly qualified on many subjects pertinent to this area of inquiry, apparently it falls to me to rectify this lack of understanding. After completing many months of long, arduous study, I now present the information I have gleaned from my research into these unholy monstrosities.

Contrary to what I had assumed, a reanimated skeleton is actually constructed from bits and pieces of any number of different skeletons, not a single one. Their diverse composition gives them the ability to form and reform, and makes them easily summoned, permitted there is adequate raw material at hand. Still, this is not to say that a skilled necromancer could not call forth a cadre of skeletal warriors to do his bidding anywhere he chooses. He merely requires less effort to construct a skeleton army in a graveyard than in the middle of a forest.

Furthermore, I have come to believe that a skeleton's intelligence is limited by the power and scope of the spell used in the creature's creation. Theoretically one could have a single astute skeleton servant or a rather dense army of a hundred for the same expenditure of magical energy. I am at a loss to explain the average skeleton's somewhat ludicrous mental predisposition, however. Perhaps the implausibility of its own existence makes the skeleton think it hilarious to hide in a barrel, cackling intermittently for some three hundred years until a victim happens by?

In contrast to the other undead horrors our world has been plagued with – namely the mindless zombies and the pack-hunting ghouls – skeletons are much more dangerous as a whole because of their ability to be organized and directed. Based on the evidence, it takes only slightly more energy to imbue skeletons with enough intelligence to use shields to defend themselves and their allies. These "shield skeletons", as I like to call them, are alarmingly common, though not as numerous as a basic skeletal warrior.

If my aforementioned points do not convince the skeptic of the gravity of this issue, consider the case of the skeletal summoner. This advanced skeletal warrior is specifically created with a higher intelligence that gives it the ability to replenish the undead ranks as needed. Yes, adding summoners to the unholy, undead mix results in a nauseating recipe for a self-sustaining army, capable of renewing itself in perpetuity so as to fulfill whatever diabolical ends its master called it forth to pursue.

It should be apparent to all intelligent readers that any madman needs only the raw material of skeletal remains to create these armies of the undead. The obvious solution is to disinter the graveyards and begin burning the skeletons posthaste. Only then can we be certain that we have removed this deadly threat from the arsenal of those who would do us harm.