Trag'Oul is a mysterious dragon-like being who guards Sanctuary and maintains the Balance between the High Heavens and the Burning Hells. In Richard A. Knaak's The Sin War trilogy, he is depicted as a constellation of stars, in each of which, a different part of life is shown - past, present, and future choices to be made, so one cannot see a definite future. Trag'Oul's exact origins are unknown, although it is hinted that he is not a unique being, that other worlds have guardians similar to him. He has not been seen since the Sin War ended. He is worshipped by the Necromancers of the Cult of Rathma.

"Trag'Oul a guardian of Sanctuary by most accounts, aligned with neither the Heavens nor the Hells. Although information is scarce, he reportedly aided Uldyssian and the edyrem during the Sin War., inteant of keeping our world free from both angelic and demonic influences. The Books of Kalan describe this mysterious entity as a celestial dragon whose body resembles a consetllation of stars." - Deckard Cain

From The Veiled Prophet:

"Only once before had Trag'Oul entered Sanctuary, and that had been just after the slaughter of the refugees by Lilith, and Inarius's subsequent reactions. At that time, the dragon had materialized for just a few seconds, long enough to lay the groundwork for Rathma's discovery of him." Another intervention is attempted by the dragon after learning of a pact between Diablo & Inarius. This is swiftly stopped by entities that keep the balance over worlds of their own, like the dragon. They tell Trag'Oul that "This goes beyond Sanctuary now. Beyond all of us who stand sentinel." & "The war is coming to Sanctuary, and if you interfere with what the balance demands, it and all existence will be forfeit."

Few have ever been in personal contact with the dragon. Most notable is Rathma, first Necromancer and of the Nephalem. Rathma was the first on sanctuary to be contacted by Trag'Oul. Rathma learns of the balance, the worldstone, and how the world was created.

The second necromancer was Mendeln, brother of Uldyssian. Mendeln was personally tutored by Trag'Oul and Rathma about the balance. He was given a magic bone dagger during his training by Trag'Oul. He also learned to see and speak to the dead during his journey with his brother during the Sin War.

Prior to Sin War

Rathma was Trag'Oul's first pupil, and even the first being to discover his existence. Throughout the centuries that precurse the Sin War it is assumed Rathma is learning about all aspects of the Balance of life, a skill more commonly known as necromancy.

Trag'Oul came into existence when the world of Sanctuary was created. He is depicted as a constellation of stars in the form of a dragon and exists in a realm that only himself, Rathma, Mendeln, and Uldyssian have seen. He is very powerful and is the supposed guardian of Sanctuary, though, as pointed out by Mendeln, seems to sit in the shadows and is not a very active guardian.

During the Sin War, Trag'Oul selects Mendeln as his second student. During the battle outside Istani both Trag'Oul and Rathma lend their power to Mendeln so he would have the strength to sends hordes of morlu and the raised dead of both the Edyrem and Peace Warders to their final resting places.[1] When Trag'Oul and Rathma realize the High Heavens have discovered Sanctuary the dragon uses his enormous power to shield the world from the eyes of the angels.

Inarius, in his fury, later sends Rathma to the void. Trag'oul fearing for Rathma's safety, teleports Mendeln straight into the void to find him. With Trag'Oul's instruction, Mendeln finds Rathma and they are both saved but the effort exhausts Trag'Oul and he can no longer shield Sanctuary from the eyes of the angels.

After the final battle between the Edyrem and the Cathedral has ended, and Uldyssian has cleansed Sanctuary of both demons and angels the Angiris Council convenes and concludes that Sanctuary will be preserved but the Nephalem with the exception of the first-borns (Rathma, Bul-Kathos, etc.) will all have their memories wiped and the council will restore the world to the state it was in before any of the humans discovered their abilities that they might "start anew". As the council agreed, they restored to the world how it had been years before, and all humans memories were wiped... excepting one. Trag'Oul spared Mendeln his memories so he could remember the sacrifice of his brother, Uldyssian, and so he might pass on his knowledge of the balance to any willing students.

We later discover Trag'Oul is furious at the fact that he has to hide his presence from the Angiris Council, even as the fate of his world is being decided.

It is made known in the Veiled Prophet that Trag'Oul is only one of many worldly guardians. Meaning not that there are multiple guardians to Sanctuary, but there are other worlds as well as other beings such as Trag'Oul that watch over their worlds. Each of these worlds is dictated by the balance and like Sanctuary they fear the Great Conflict coming to their worlds.

Because the war is coming to Sanctuary, and if you interfere with what the Balance demands, it and all existence may be forfeit.
They left him, then, all the others who stood guard as he did over their separate worlds, left him with the knowledge that it was his Sanctuary whose imminent fate might decide theirs. [2]

The Necromancer set, Trang-Oul's Avatar, is the first mention of the dragon.

"Trag'Oul was last seen in the Sin War Trilogy. He is sort of this world-protector dragon. He might be a living constellation. He might be a personification of the past, present, & future of humanity. He is a mysterious character. He is the founder of the necromantic order and is very concerned with balance. He is not around anymore, after he set the necromancers on their path. He's gone, we don't say where. It's one of the mysteries of the universe that are out there right now." - Kevin Martens (Lead Content Designer)

Additionally, Trag'Oul has been confirmed to be absent from Diablo III.[3] 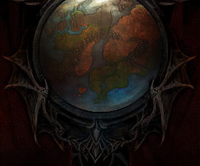 It is possible that the wings appearing under the Sanctuary globe from the Diablo III Official Web Site are depicting Trag'Oul.

This section contains facts and trivia relevant to this article