A Town Portal is a fast travel mechanism that allows the player to be transported back to town from most remote locations in the game. 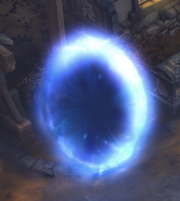 A Town Portal as it appears in New Tristram.

Town Portals were reintroduced originally as a form of transportation by using the Stone of Recall, allowing players to teleport back to town. In Beta patch 10, the Stone of Recall method was removed and instead, the ability to cast a town portal was integrated right into the UI. Players can unlock the town portal ability during the quest A Shattered Crown.

When going through large areas between Waypoints, it is a good idea to open up a Town Portal as a quick escape route. You can use it to retreat from danger or to get back to your body much more quickly if you die.

Also, in the wilderness, players may encouter Portal Shrines. These shrines give players the "freedom to go home...", opening a Town Portal that lasts twice as long as regular Town Portals. The players can use these shrine portals as many times as they want. If the player casts another Town Portal from a scroll, a second, normal blue portal will be created. But, if the player activates another Portal Shrine, the original shrine portal will be replaced by the new one.

You cannot enter Town Portals cast by other players in areas beyond the "blocking quests" without having completed those quests: e.g., Canyon of the Magi/Seven Tombs/Duriel's Lair (The Summoner), The Harem/Palace Basement/Arcane Sanctuary (The Tainted Sun), Durance of Hate (The Blackened Temple), The Worldstone Keep (The Ancients), The Secret Cow Level (Terror's End in DII classic or Eve of Destruction in DII: LoD). NOTE: A player who kills the High Council (but doesn't use Khalim's Will to smash the Compelling Orb) may take a Town Portal into the Durance of Hate.

This is to prevent higher level players from helping lower level players to advance further in the game without working for it. If a player is unable to enter a portal, this means they need to complete a quest.

In Diablo I, Town Portal is a non-class-specific spell that can be learned from books. It's mana cost decreases as the player increases the level. It may also be cast from a scroll nullifying it's mana cost. In Hellfire, there is also a portal shrine.