The Zakarum High Priests in Kurast proclaimed Leoric King of Khanduras many years ago. He ruled well until Diablo's influence drove him mad and the loyal knight Lachdanan was forced to slay him. Afterward, Diablo himself raised Leoric from the dead as the Skeleton King until the monarch's son, Aidan, vanquished him. 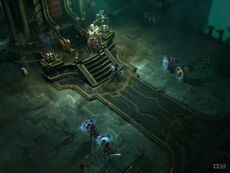 The Wizard confronts the Skeleton King at his throne

You dare to bring the warmth of life into my tomb? Prepare yourself, mortal, to serve me for all eternity!

The Skeleton King is a boss in Diablo III. The Skeleton King, also known as the Mad King of Tristram, is the now-undead King Leoric, bound once again to the mortal realm, even after his defeat during the events of Diablo I. The Skeleton King was reawakened by Tyrael's fall from Heaven, together with all the other people unjustly slain during Diablo's reign in the events that unfurled in the course of the first Diablo game.

The Skeleton King was first revealed as an in-game encounter in the Wizard introduction trailer, greeting the Wizard and warning her to prepare herself to serve him for all eternity (very similar to the way he greeted the player that entered his tomb in Diablo I) at which the Wizard gave a confident grin. He was at this point present as a ghost giving orders to his numerous minions.

At the end of the trailer, where the Wizard stood before his throne, his ghost was seen stumbling backwards onto his skeletal body sitting on the throne, taking control of it and standing up with his huge mace held ready, laughing malevolently. He then staggered forward to the Wizard for battle.

The Skeleton King was also the final boss in the BlizzCon 2008 demo and Diablo III Beta. After placing the crown atop the dormant bones of King Leoric, the Skeleton King once again returns to life.

Oddly, the Skeleton King fights with a massive mace-like weapon, even though the player is able to interact with his sword briefly before the encounter - a sword that the Skeleton King is armed with in the first game.