The Silver City, the Crystal Arch, the Diamond Gates. I can scarcely imagine what it must be like to behold these magnificant structures in person, or how it might feel to cross bridges of light or bask in the glory of cascading fountains of music and harmony. After all, how could I, a mere mortal, ever hope to comprehend such splendor? 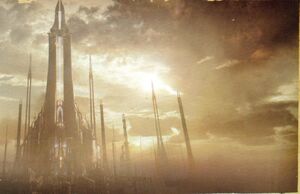 The Silver City is at the heart of the High Heavens, and is a sprawling city of majestic buildings, spires and buttresses. It houses the Silver Spire, the tallest building in all the High Heavens, atop where the Crystal Arch resides.[1] Entrance to the city is given through the Diamond Gates, and although the angels have been at war with the Burning Hells since time began, the hellish forces have yet to breach those gates.

Within the city lies several districts, five of which are the residences of the Angiris Council members.

The Silver City is like a small world unto itself, a sprawling complex of glittering, soaring spires and sweeping butresses. Its architecture pulses with light, and it sits in a backdrop of radiant luminescence. True to the nature of Heaven, where its domains are set, it is said that the Silver City is forever, that it will never change. Its tallest tower, the Silver Spire, contains the Crystal Arch, the supposed birthplace of all angels.

The city was protected by the Diamond Gates, and while they were assailed many times over the course of the Great Conflict, no demon ever gained entry to the city itself. No demon, that is, until Diablo invaded the city, the Lord of Terror now the Prime Evil, having combined the essences of his six counterparts into a single being. The gates were shattered and Hell gained access to the city. The forces of Heaven fought against the demonic hordes, but they were fighting a losing battle. Thanks to the efforts of Tyrael and a band of mortal heroes however, the city was saved and Diablo himself cast down. The damage to the city was 'healed' by light streaming from the sky above.

It is where the Council decides the fate of Sanctuary at the end of The Veiled Prophet.[2]

Tyrael's abode reflects his nature, and the Courts are a place where angels come to terms with each other, but also where they can reclaim lost harmony.[3]

Much like the Courts, the Gardens are a place where angels go to find balance within themselves and to clear their minds. There are no actual trees here, but the garden shimmers in light, and the sounds of a harmonius choir can always be heard in the background.[4]

These glowing chambers are where Imperius trains both himself and other angels. The halls echo with songs of his deeds and trophies of his conquests over the eons are on display.[5]

Though it is called a library, it is unknown if there are any books inside of Itherael's domain. What is known to be there are several crystals, said to be shards of the Crystal Arch, that provides visions of the future. These are noted and recorded by angels, but it is Itherael who interprets them.[6]

Within Malthael's pools are infinite wells of emotion that contain the sum of all emotions experienced by all creatures in Creation at any one time. Malthael has spent years on end within his chambers, staring into the Chalad'ar which holds the waters of the pools within it in order to expand his wisdom.[7]