I would rather not discuss the sand wasp. These overgrown insects wouldn't be notable whatsoever if not for their exceptionally poisonous stings... which, alas, killed my young apprentice. I thought he would be more careful when I sent him to retrieve samples from the hive, but... his parents did not understand my perspective.

The Desert Wasp releases a chain of 3 offspring as projectiles towards the player dealing lowish damage each. The creatures themselves can fly and will try and hover at a reasonable distance from the party to avoid taking damage.

The offspring projectiles are slow moving so care must be taken to not accidently walk into them. In the presence of Slow Time it is possible to gather large numbers of these projectiles making it the easiest way to get the related Wizard achievement. Although each deals lowsih damage, in high numbers it is possible for a player to be nuked by them which is especially a problem in Hardcore. Players should always keep an eye on the movements of projectiles to avoid this from happening. Alternatively classes such as the Witch Doctor can depend on minions to tank most of the projectiles reducing the threat they pose.

The Desert Wasp was revealed at the 2009 Blizzcon. 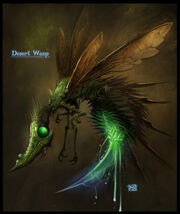