The Rogue is one of three playable classes in Diablo I. She is skilled with the bow and belongs to the Sisterhood of the Sightless Eye, an order which is central to Act I in Diablo II. The rogue is much like the Sorcerer in that she starts out weak but has the potential to grow very strong, though she cannot quite rival the power of the Vizjerei spellcaster.

Although she is not the canonical hero in Diablo I, the Rogue did fight in the labyrinth beneath Tristram. After Diablo's defeat, she evidently returned to the Sisterhood only to be corrupted by Andariel after Diablo had passed through the Rogue Monastery. She became known as Blood Raven, and caused great havoc and torment among her sisters until she was slain by the band of heroes that would go on to defeat the three Prime Evils during the events of Diablo II. 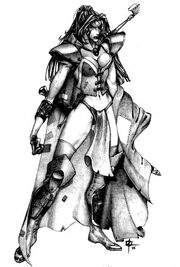 Concept art for the Rogue

The Rogue has the ability to disarm traps that she sees on doors and chests. Though it sounds useful, it is just about as useless as all class skills, as traps aren't very common and usually do not deal a whole lot of damage. It might however be the most useful of the class skills when compared to the Warrior and Sorcerer though.

Like the Sorcerer the rogue has the advantage of being able to kill enemies from afar, so she doesn't run the risk of engaging enemies in melee. She can also be prominent with Fireball, Stone Curse, Chain Lightning, and Mana Shield, some of the better spells in Diablo I with some +magic boosts and sinking skill points into magic. This can make her a dangerous character combined with good archery damage(20-30 or so)

"The Sisters of the Sightless Eye are a loosely organized guild shrouded in mystery amongst the peoples of the West. These highly skilled archers employ ancient Eastern philosophies that develop an Òinner-sightÓ that they use both in combat and to circumvent dangerous traps that they may encounter. Known only as wandering Rogues in the West, the Sisters conceal their secret affiliation by posing as simple travelers. Many pompous fools have made the mistake of underestimating these steel nerved women in combat and paid a terrible price for their vanity.

The strange events transpiring in Khanduras have caught the attention of many of these Rogues. They have come from as far as the Eastern dunes to test their skills against the dark evil that is said to be lurking in Tristram. It is also believed that untold riches wait to be discovered among the ruins of the Horadrim monastery.

Although not as powerful in close combat as the Warrior, the Rogue is the undisputed master of the bow. A skilled Sister can send a stream of arrows at an opponent, each fired with a seemingly careless precision. The innate sixth sense that all Rogues seem to possess also allows them to sense trapped fixtures, and aids them in attempts to disarm these traps."[1]