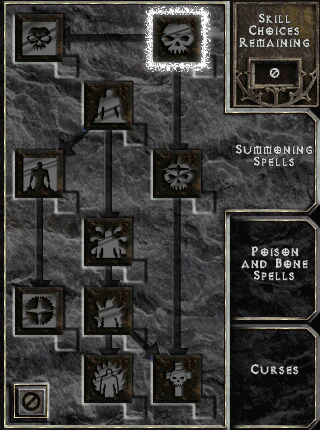 Raise Skeleton is the main skill used by Summonancers, Necromancers focusing on the Summoning Tree. If you have never updated your patch, instead of 8 max skeletons, you receive one more potential skeleton per point. The skeletons follow the Necromancer around and attack any enemies they encounter. Skeletons can be raised from any monster that leaves a corpse, excluding Act Bosses like Andariel. Only melee skeletons are raised; a Necromancer cannot get archer skeletons, and skeletal mages are raised by a separate skill, Skeleton Mage.

For skill levels 3 and higher skeletons have their life calculated from the following formula, using the base values listed above.

For skill levels 1 and 2 their life is their base life.

Early on, Necromancers learn to control the skeletal remains of deceased creatures. Invoking this skill causes a nightmarish jumble of animated bones to rise from a fresh corpse. Animated partially through their own will and partially through the summoned spirits of ancient warriors, Necromancers often maintain a small host of these reanimated soldiers to do their bidding[1]