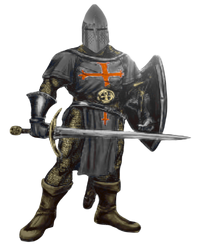 Paladins are versatile warriors, who believe in discipline and war art. They have mastered the usage of shield and can block the most powerful of enemy attacks with it. Their potential in building defense is unmatched and it lets them survive the most horrible of the battles with demons in the Underworld. They don't deny magic but their potential in this area is limited. They usually use defensive and healing spells.

They can't make a good use of (cross)bows. But they wield sharp and blunt weapons better than any other class, and they always use the weapon with a shield (their war ethics doesn't allow for two-weapon style because it brings down their defense). They are keen on weapons and armor and can repair damaged items on their own, albeit at a small price of decreasing item's maximum durability.

Strength is key to doing good damage, when starting a paladin you will want to keep this in mind. Remember to occasionally invest in dexterity and vitality so you can effectively tank. When in the presence of ranged enemies, try to charge up to them and give them a good beating. As a melee character, effectively herding your enemies toward yourself is a good thing to learn. With good herding skills, you can vanquish your enemies at your leisure without being surrounded by your foes. Later in the game you should have high strength, good dexterity to hit enemies with, good vitality to tank with and enough magic to use a few spells.

Stats to focus on, in order of importance: STR, DEX, VIT, MAG