In Short, the ManaShield Sorc is a Sorceress who boost her mana and use Energy Shield as defensive skills. As Lightning and Chain Lightning are some prerequisites to Energy Shield, it's a good idea to stay in the Lightning Spells for the Primary Attacks.

The first thing we all want to know is "Which stats should I improve ?". Well, if you have the D2 guide, do not trust it !!! The stats points should be different for every type of character so this guide is bulls**t ;) This is my stats repartition :

Strength : My goal was to use a Monarch which require 156 Strength and with my Gears and Charms, I only needed 76 Strength, so it will depend on yours. Monarch are essential for a Sorceress so try to put the least amount of Strength to hit 156 with your Gears/Charms.


Dexterity : Some people would put enough DEX to reach the Max Block and think that's a good idea. However, you're not a melee class so it's useless to reach Max Block for 2 reasons :
First, if you waste points here, you'll need to remove a lot of points in energy, so your Energy Shield will be less and less useful.
The Second reason is that you're goal isn't to be hit, so why would you need to block ?


Vitality : The only reason I've put some point here was to stay alive when I'm against some Mana Drain monsters. If you're able to play without spending any points in VIT, Put them in Energy instead :)


Energy : Do I really need to explain ? To be sure, I'll give you a little explanation... You're a Sorceress who's using Energy Shield. 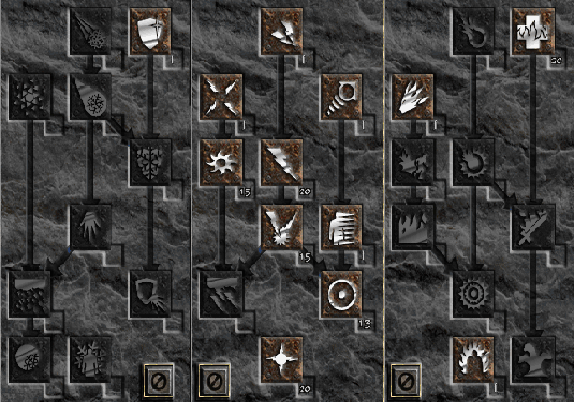 Cold Spells :
Frozen Armor : Can be a good second Defensive Skill, and it gains a lot of levels from my Gears/Charms

Fire Spells :
Warmth : A big part od the damage taken goes to my mana so I need a good Mana Regeneration
Inferno : Useful against Fire Immune, get a lot of levels from Gears/Charms and gain damage from Warmth Synergie
Fire Mastery : Boost Inferno

I think it's the best Orb when it comes to stat. However, it's not the one I use cause the 25% Teleport is just very bad.

Boost Skills, Damage, Cast Rate, Energy and doesn't teleport you... Awesome !!!
However, you need to find a perfect one (with +3 Skills)