Though Azmodan is close to all his lieutenants, Cydaea is his special favorite. The Maiden of Lust is both beautiful and grotesque in appearance, with the torso of a woman and the legs of a spider. Her voice is said to be as smooth as honey, but she speaks only words of death.

The Maiden of Lust was originally named Mistress of Pain. Blizzard had decided that she'd be dropped from the game due to feeling that she didn't fit in with the story. However, the decision was reconsidered after they saw a cosplay outfit of the Mistress of Pain at the 2009 Blizzcon cosplay contest because it was "so awesome".

A lieutenant of Azmodan, the Maiden of Lust enjoys causing psychological torment.[1] She is the second boss in Act III. 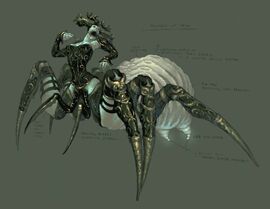 The Mistress of Pain

The Mistress of Pain is an arachnid demon and wears a kind of old, torn Victorian Dress and a Head-dress. Her face was covered with a veil in her first concept art but another picture reveals just how hideous she really is, as well as detailing some more striking features.

Her legs are her most salient feature. She has three pairs of proper legs along with a pair of stingers in the front. The legs do not look like any kind of insect's legs as they are made of soft flesh rather than an exoskeleton, appearing more like the thighs of a voluptuous woman. Her shins are covered with black stockings decorated with intricate golden demonic designs.

Her abdomen is also very soft but is covered by her rib cage, which extends down to cover her entire rear-end for protection. On the tip of her abdomen are spinnerets that spin a very sticky web that can doom unwary victims.

Another, very unusual, feature are the openings seen on top of her abdomen. She can lob dangerously toxic projectiles towards her enemies through them. What other purpose they serve is currently open for debate.