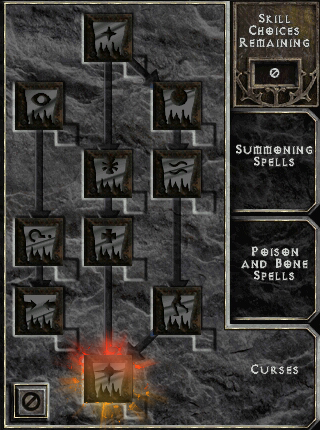 Lower Resist is one of only two skills in the game capable of reducing elemental resistances below 100%, the other being the Paladins Conviction aura. Unlike Conviction however, Lower Resist also lowers a monsters poison resist. The Paladin aura only affects fire, cold and lightning.

Lower Resist is capped at 70% effectiveness, meaning a monster with 115 in fire, cold, lightning or poison resist will not be rendered vulnerable to any element by this skill (as Lower Resist only works at 1/5 effectiveness when breaking an immunity).

It should be noted that resistances on monsters come in multiples of five. While the maximum effectiveness of this curse, discussed above, would be able to break immunities up to 113, the highest breakable resistance that will ever occur in-game is 110 - there is no qualitative benefit from maximum effectiveness in terms of making a wider range of monsters vulnerable. For the purpose of simply breaking these immunities, a mere 10 points, giving -55 to resists (-11 against immunities) would suffice, as opposed to the 60 points needed for -70 (and -14). The significance of this is that, when dealing with poison-immunities, those that are breakable at all will have a resistance of 110, 105, or 100; 10 points brings these to 99, 94 and 89, respectively, while an additional 50 points (for maximum effectiveness) will reduce these values to 96, 91 and 86. This is a negligible difference for such an enormous investment. Even if Lower Resist was considered worthwhile for dealing with poison-immunes (or any immunes, in the absence of a Conviction aura), the 50 points spent on maximum effectiveness would be wasted. Nevertheless, the skill is useful in dealing with non-immune monsters.

Simply put, this skill increases an enemy's susceptibility to the harsh effects of the elements and elemental magics. Skin burns like paper, chills cut to the bone, and lightning is drawn to the victim as if they were an iron bar in a rainstorm.[1]