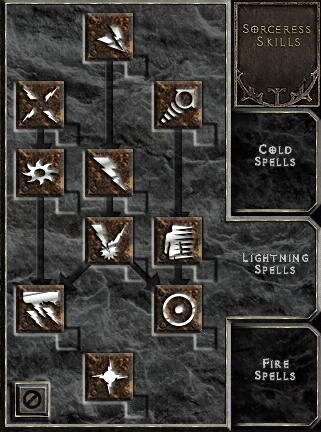 The Sorceress' Lightning Spells is the counterpart to her other two trees, Fire Spells and Cold Spells. Like other skills of the lightning skill genre, while having a very, very high damage range gap (maximum damage minus minimum damage), this Skill Tree makes up for it in a potentially enormous maximum damage, the highest of any skill in the entire game if your character is geared properly and has skill points invested correctly.

The Sorceress' lightning-based skills also are heavily dependent on Faster Cast Rate, a principle that basically boils down to "how fast a skill can be cast/used in a short period of time". So, even a Sorceress with a low-damage Charged Bolt spell could potentially do more damage than a Sorceress with a higher damage spell over time.

Personal Opinion: It is a good idea to invest in Faster Cast Rate gear if you cannot afford high-end gear with +x to all skills or +x to Sorceress skill levels. While you might not have the strongest attack, the amount of damage you deal over time could potentially be as high as someone with better gear but a slower Faster Cast Rate. Faster Cast Rate is pivotal to a lightning skill-based Sorceress.