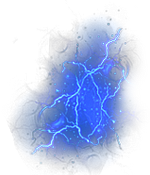 Lightning, despite its very large damage cavity (maximum damage minus minimum damage), has the potential to become the most powerful skill in the game (with the exception of static, and based on maximum damage). It is possible to reach over 55,000 damage with this skill, and even with the large damage cavity, you are still pretty much guaranteed a powerful attack every time you cast it. This will probably become your primary attack, if you are a Sorceress with a focus on Lightning-based attacks.

This spell allows a Sorceress to summon the power of the heavens and emit a tremendous surge of electrical energy. Creating a channel of lightning directed at her target, she cuts a swath through her opponents with pinpoint accuracy.[1]