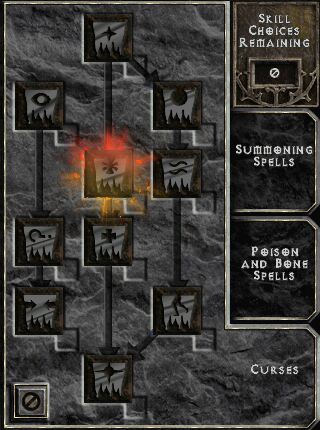 Iron Maiden inflicts a curse on enemies that functions just like the Paladin's Thorns aura; when a monster deals damage, a portion of it is returned on itself. it only works on physical melee damage.

Iron Maiden is useless in higher difficulties, as the damage monsters cause relative to their health is minimal. Look at the following comparison of a Balrog's stats in Normal and Hell:

The Physical resistance affects Iron Maiden, meaning it will take a about 12 times as long to kill himself in Hell as it does in Normal.

This spell curses a creature, condemning them to receive whatever pains they inflict upon others. The greater the skill of the Necromancer, the greater the magnitude of torment the victim receives for his wrongdoings. Damage dealt is damage received.[1]