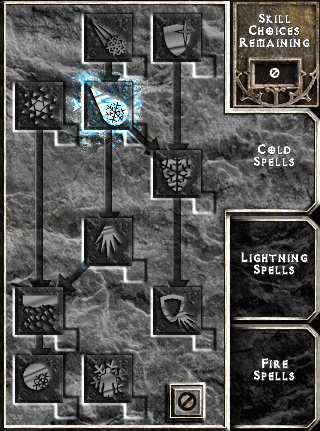 Ice Blast is one of the most useful skills in the Cold-type Sorceress' repertoire of spells. Though lower in damage than Fire Ball, it is its equivalent in usefulness in the Cold Spells skill tree. What it lacks in damage (though it is actually fairly good damage), it makes up for with its ability to instantly freeze an enemy in its tracks, and subsequently might shatter the enemy upon further hits. It is a good spammable projectile skill to accompany the Sorceress' Blizzard skill.

The freezing damage of this spell can shatter an opponent into icy shards, leaving enemy spellcasters little with which to resurrect their minions. In this way the Sorceress can make quick work of those who would use the dead against her.[1]