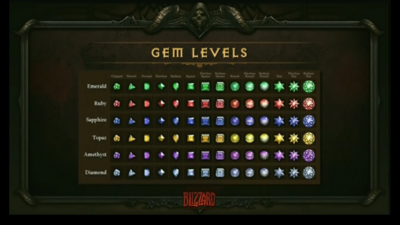 This article is about gems in Diablo III. Were you looking for Gems (Diablo II)?

Gems are small stones that can be socketed into a variety of player equipment, augmenting the piece of gear with additional modifiers. There are four different kinds of gems in Diablo III: Amethysts, Emeralds, Rubies and Topazes. Each gem type bestows different bonuses depending on what kind of gear they are socketed into. Diamonds and Sapphires, present in Diablo II, were originally in the game as well, but were cut after a gem overhaul by Blizzard during the Beta.

The four different gems provide a specific bonus depending on whether they're socketed into a helm or another piece of equipment. These stats do not vary from gem to gem but will be identical. Higher level gems provide higher bonuses.

Gems, once socketed, can be removed by the Jeweler. This will cost gold but will return both the gem and the item to the player. This is a change from Diablo II, where socketed gems were destroyed upon removal. Gems can also be recovered from gemmed items if the item is salvaged at the Blacksmith.

Gems can also be stacked in the player's inventory, making them much easier to carry around. This also means they will be sold as stacked items in the Auction House.

Helms have percentage-based bonuses, weapons grant bonuses that depend on the gem color, while other equipment slots provide numerical improvements to one of the four base stats.

There are 14 different quality levels of gems, ranging from Chipped, the lowest quality gem, to Radiant Star, the highest quality. The higher the quality of the gem, the greater the bonus bestowed on the item. All gems, regardless of quality, have no level requirements. This means that new characters can be given significant starting bonuses if a player is wealthy and can buy powerful gems for them at creation.

Only the first eight quality levels can drop from monsters, the remaining five must be created through the services of the Jeweler. Two gems of a lower tier can be upgraded into one gem of a higher tier for ranks 2 through 8, with the remaining tiers requiring three. (Originally, three gems were required to create a higher tier in all cases.)[3]

Upgrading only Chipped gems to Radiant Star quality is an impossible task for one person, and while upgrading Perfect gems also seems hard for one player, it is much easier for the millions of Battle.net players. Blizzard intends for top level gems to be hard to acquire and a long-term goal for people to work towards if they want to push their character just a little bit further.