Diablo III game mechanics are the core gameplay rules of Diablo III. They comprise numerous facets of gameplay, including: the game engine, player development, items, skills, combat, death, NPC interaction, and cooperative play with other players. Leveling up, acquiring better items, using more powerful abilities, and joining forces with human players to slaughter hundreds of demons and undead are trademarks of the Diablo series and are some of the most alluring features of the game.·                                 Pacquiao vs Bradley live stream Online TV here 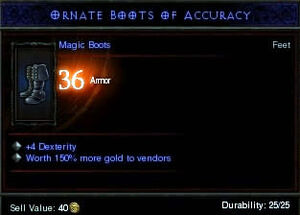 The Diablo franchise is well known for its vast array of items, and the third installment is no exception to this. Items are randomly dropped from monsters upon their death. Item types include:

The inventory system was originally designed to replicate World of Warcraft's item system, in that each item took up a 1x1 space in a gridded bag. Blizzard has, however, decided to change this in order to recapture some of Diablo's "tetris inventory". However, Blizzard has stated that items will not take up nearly as much space as they did in Diablo II, and players will not have a problem keeping items in their bags.

The current version of the inventory is a grid where certain items will take up one or two squares.

The Stash makes a return in Diablo III and functions similarly to it's predecessor, as a repository for items and following the player from town to town. The most noticeable difference however, is the space is now automatically shared among all characters on the player's account. Additional slots can be purchased with gold.

Instead of the same loot dropping for all players when a monster dies (like in Diablo II), the monster drops loot for each player that only he or she can see and pickup. If a player picks up the item and drops it back on the ground, any other player can see it and pick it up.

Crafting will return in Diablo III in the form of three artisans. Each one of them will have their own profession and specialty. Revealed at GamesCon 2010, players can now make their own gear through three vendors. It has not been determined if the artisans are all going male like the first artisan.

The first, the Black Smith focuses on repairing and selling items and can also create weapons and armor for your character. He can also add sockets to any weapon or armor much like the quest reward from the Siege on Harrogath Quest.

One of the most emphasized mechanics of the Diablo franchise is the ability to level up a character through the repetition of slaying computer controlled enemies. The character starts at Level 1 and must combat increasingly difficult enemies to increase the player's experience. Once enough experience points have been attained, the character will level up in rank, allowing for the expansion of different abilities, attributes, and items. After each level up, the number of experience points needed to advance again increases, requiring even more enemies to be slain. Easier enemies will begin to give less experience, while harder ones reward more. Killing many enemies in rapid succession will also earn bonus experience.

Diablo III has four attribute stats: Strength, Dexterity, Intellect, and Vitality. Attribute points are automatically added when the character gains a level. Items in Diablo III will not have attribute requirements. Stats can also be enhanced through equipment.

Originally, skill allocation acted in much the same fashion as it did in Diablo II, with low-level skills acting as prerequisites for more powerful abilities. This functionality has since been scrapped and replaced with an open, tiered system. Each tier features several skills from which the player can choose. No skills have any prerequisite requirements and higher skill tiers are unlocked as the character levels up. As of the latest build shown during the Beta reveal conference in August 2011, the number of active skill slots has been reduced from seven to six. In addition, the player will be allowed to enable up to three passive skills (formerly known as Traits). The player will begin the game with only 2 active skills and no passives. The last four active skill slots can be unlocked at levels 6, 12, 18, and 24, and the three passive skill slots are unlocked at levels 10, 20, and 30.[1]

The rumored respec option is now gone and replaced with a system where skills can be changed at any time as long as the player is not in combat. There is no penalty for changing skills.

A skill hotbar has been added to Diablo III in place of the potion belt from Diablo II. The skill hotbar allows for players to use a number of skills consecutively with the simple click of a hotkey. The hotbar uses 1-4 to access a skill assigned to it as well as left and right mouse click. A dedicated potions slot is bound by default to number 5. In total, it allows you to use six skills/items and one potion without having to change any of them out. A Town Portal button was integrated into the skill bar after Beta Patch 10. 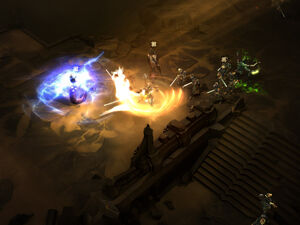 Instead of every class using Mana, like in the previous two Diablo titles, Diablo III has been confirmed to utilize 5 different resource types, giving each class a unique playstyle:

Functioning much differently than Diablo II's Runes, Skill Runes are paired alongside skills, changing their functionality, improving their damage, or altering their appearance. Factoring in the number of skills, Skill Runes, and Skill Rune qualities, each class will have nearly 97 billion combinations of active skills (Number is inaccurate with the new system).

Skill Runes are to be obtained through leveling and will continue to be unlocked from level 6 all the way to level 60. Skill Runes no longer have ranks and to replace this functionality affixes will now appear on items in order to power up skills like that of the old ranked rune system. [3]

The combat animations are far longer in Diablo III than in previous versions, due to the 3D graphics as opposed to 2D sprites. The result is less spamming of skills, which may also lead to skill cooldowns to prevent graphics overload.

Initially, cut scenes were introduced as bridges for conversations between the player and the NPC. Recently this feature has been scrapped and replaced with a less constricting method of dialogue conversation. The NPC simply speaks his or her mind without interrupting the game, whose voice becomes louder the nearer the player is to the NPC. This allows players to skip conversations they've already heard, but does not stop others from staying near to the NPC and listening. NPC's will also change their dialogue to reflect the character you are playing. NPC's will show like or dislike to your character class along with many other personable touches catered to each class.

Being a cooperative game, players can form parties to venture through the game together. Parties are limited to four players.

Followers can either be temporary NPC's that will travel and fight along your side, or more persistent types akin to Hirelings in Diablo II. An example of the followers were shown in the first gameplay video as two archers followed the Barbarian and attacked the enemies close to them. Persistent followers were later unveiled in an official video featuring three different archtypes:[4]

SiegeBreaker biting the head off of a Barbarian

If a player dies from a boss, there is a chance of it triggering a special death animation for the Player. An example was shown in the first gameplay video when the Siegebreaker Assault Beast picks up the Barbarian and bites his head off. He then throws the Barbarian's body across the screen.

There are two different ways a character can be resurrected in Diablo III. Character who die in battle will resurrect at the most recent checkpoint they have reached. These checkpoints will occur more often than waypoints. However, any checkpoint reached will be erased upon exiting the game and only the waypoints will remain saved. The second way to resurrect is through a cooperative resurrection. Players in a party are able to resurrect other party members. Originally, there was a reagent needed to perform this ability but it was removed.

Blizzard has created their own game engine to run Diablo III on. They originally used the Havok Physics engine but eventually created their own so they could do anything they need to with the engine. This engine allows for monsters to fly through the air like a rag doll, sometimes creating some hilarious and epic moments. Their engine also allows for Diablo III to have destructible environments. Examples have been shown like a wall crushing zombies or a chandelier falling on skeletons and killing them. Players will be able to interact with their surroundings to help them defeat the forces of Hell.

Randomization is still an important feature in Diablo III. It can affect the layout of areas, which monsters spawn on them, and the items they drop. The potential for new areas or quests to appear are also affected by the randomization of the game.