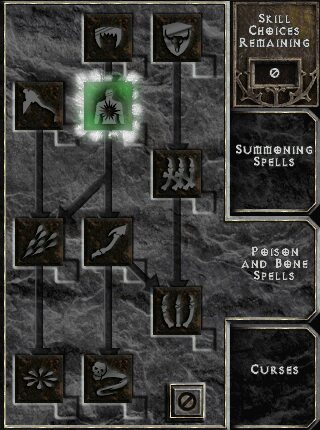 Corpse Explosion does 50% Physical damage and 50% Fire damage. Monsters that are resistant to Fire will take less damage, and the same applies to monster with Physical resistance.

Corpse Explosion is a very useful skill for the necromancer. Since the damage autmoatically scales with the difficulty (higher level monster means more hit points and more damage). This ensures that Corpse Explosion is always a viable skill to use no matter the situation. The benefit of putting points into this skill is the added range. The first point only gives a measly 2.6 yard radius, which can be hard to use effectively; most monsters will probably be outside of the range of such an explosion in a battle. As more points are invested, either through hard points or those of + skill items, the range increases, and eventually it can get so large it effectively covers the entire screen, making it a deadly weapon. With just one corpse, the Necromancer can use that corpse to kill other enemies, which in turn generates more corpses to explode. In most cases only two or three bodies are required to instantly wipe out any monster group.

Every corpse created as a result of a violent death carries with it the anguish of its final moments. With this spell the Necromancer is able to call upon those energies and focus them into a single violent force. This force then expels itself from the carcass with such power that it causes a dramatic explosion.[1]