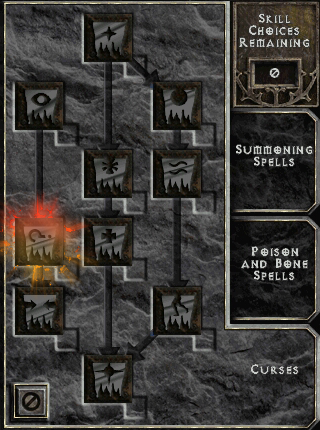 Using this curse will cause monsters to attack targets at random, which can either be the player, allies, hirelings, minions, but most importantly it can be other monsters. Duration of the skill decreases in Nightmare and Hell.

Necromancers can tap into the spirit realm, channeling bitter and mischievous spirits into the minds of nearby enemies. The victims are bombarded with the gibbering of the dead, which, indistinguishable from their own thoughts, urge them to strike at friend and foe alike. The discordant wailing of these spirits builds to a crescendo, eventually driving the victim mad. Cursed monsters attack randomly.[1]