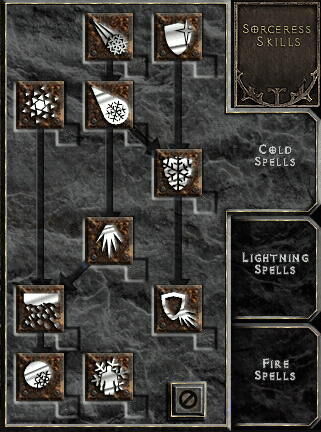 The Sorceress' Cold Spells are counterpart to her other two trees, Fire Spells and Lightning Spells. Although Cold Spells do not deal as much damage at once as Fire Spells and can't be cast nearly as fast as Lightning Spells, many of the skills in this genre make up for it by freezing enemies or slowing enemies, which can lead to getting in more attacks at once on your part before the enemy reaches you.

Since this skill tree does not require as powerful items as other skill trees, it is often a good starting point for poorer players, as a decent amount of damage can be reached, and battle is significantly slowed down by the cold effects instilled in your enemies.

Personal Opinion: I often use a Blizzard-based Sorceress if I'm starting in the wake of a Ladder Reset or if I'm particularly poor. They're easy to get up and running, as they do not *require* as good of gear as other builds in order to be efficient, and they make excellent boss runners, as Blizzard not only slows, but also hits multiple times at once. Slowing down an enemy with Blizzard and then spamming the monster with Ice Blast while you're waiting for the cool-down period for Blizzard to time out is a very effective way of taking down enemies and bosses.