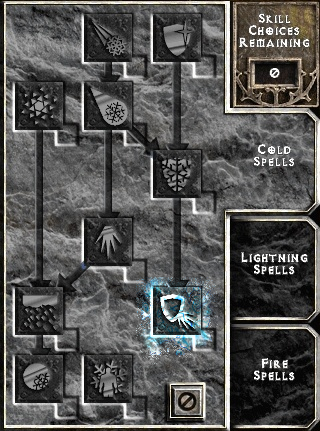 Chilling Armor is the last of the Cold-based Sorceress shield spells available under the Cold Spells Skill Tree. While its defense ratio is lower than Shiver Armor, it has a perk in that it shoots off an Ice Bolt at long-ranged attackers when struck.

The main thing a Sorceress might want from a shield spell is defense boosting. The Ice Bolt expelled from Chilling Armor never becomes sufficiently strong enough to balance the defense ratio loss this spell has compared to Shiver Armor. As such, it might be more worthwhile to invest in the previous skill spell the Sorceress has to choose from in her arsenal.

The best defensive spell available to a Sorceress is manifest in this formidable armor. The spell actually defends against ranged attacks, turning aside arrow and bolt. Those seeking to engage the Sorceress in a melee will soon feel the icy bite of their folly.[1]