For the Wizard spell of the same name, see Charged Bolt (Diablo III). 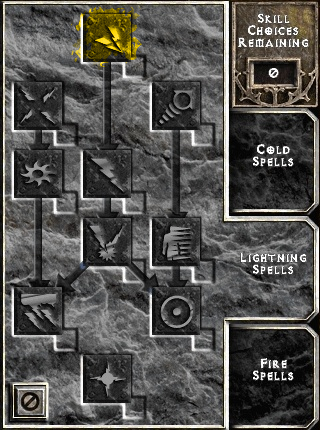 Charged Bolt is the first skill available on the Sorceress' Lightning Spells. While the damage may at first be laughable, as you invest more points in this skill, it's damage escalates and its number of bolts per cast increase. Coupled with a high Faster Cast Rate, this can become a very, very powerful skill, with each single bolt doing nearly a thousand damage.

By charging the ions in the air surrounding her, the Sorceress discharges bursts of electrical energy. These missiles flit about randomly, chasing down her opponents and shocking them to the core.[1]