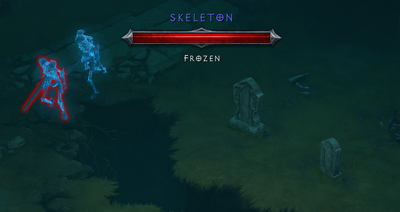 Champion Monsters have blue colored names and spawn in packs.

Champion Monsters, are more powerful versions of regular monsters. They spawn with additional abilities that can make it harder to defeat them - to assist with the added challenge, they also drop larger Health Globes. The higher quality loot from a champion pack will only drop when the last Champion of the pack is killed. Not all areas support the spawning of Champions monsters, but when possible they will be the same kind as normal monsters for that area. The number of Champion Monsters in a pack can vary depending on the monster.

The following are a list of abilities that can be randomly generated on Champion Monsters: