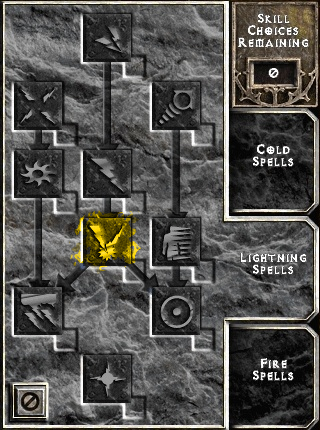 Chain Lightning is the Lightning Spells skill that makes up for the tree's lack of Area of Effect skills. When cast, this spell sends a bolt of electricity, similar to Lightning, through your enemies. The difference is that it automatically targets itself to the nearest enemy until it reaches its maximum number of hit targets. As you invest more points in to this skill, its damage will increase, as well as its total number of hits.

An improved and more complicated version of the Lightning spell, Chain Lightning arcs from foe to foe, branching out until all of its energy is dissipated. The stench of burnt flesh and ozone is often all that remains after this spell is cast.[1]