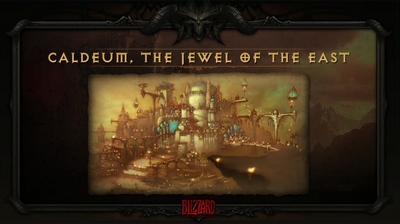 Caldeum was once the proudest city in all of Kehjistan, the trade capital of the entire world. Caldeum was never seen as the heart of the empire, even though it rivaled Viz-jun, and later Kurast, in size, and those who called Caldeum their home liked it that way. Even when the Mage Clan Wars erupted, the battles were never tolerated to affect trade in Caldeum, for while politics and magic may be important, trifling with trade is a serious matter.

Let Kurast see itself as the center of the world, they would say. We'll keep our free exchange of goods, currency, and ideas, thank you very much. But the pride I once held in this great city has become tarnished and dull. In looking back on it all, now, I would have to say that this rot infecting our city started when a good number of Kurast's nobles fled their homes and took up residence in Caldeum. I have heard all the horrific and unbelievable rumors as to why they fled their great city, but the reasons did not concern us. It was their attitude that held our concern. As relief at being safe from whatever drove them here faded, their mood changed to entitlement and then, ultimately, to arrogance. They had no trouble demanding their "rightful" place on the trade consortium council governing our city, and they were prepared to use their wealth to hire the mercenaries needed to see their ambitions through. I was initially dubious when the emperor of Kehjistan emerged to confront this quickly deteriorating situation. But the charm, leadership, and intelligence that he brought to bear as he quickly resolved the conflict between our council and the Kurast nobles were nothing less than masterful. When the people fully supported him in his role as our emperor, I saw this achievement as nothing short of a miracle. Though we had always been part of the empire of Kehjistan, and therefore under his rule, we had always behaved as if we were a free entity, beholden to no one but ourselves. It truly seemed at the time that catastrophe had been averted, but now it has become all too apparent that it was merely hidden beneath a thin veneer of civility. This veneer began to shred when Emperor Hakan became ill. His influence started to wane, and the mood in Caldeum changed with his health. As he got worse, so did our once fair city. When he died and his ineffectual child heir took the throne, Caldeum began to circle the abyss. Our list of ills seems never-ending: the state of our downtrodden and the slums they are forced to live in, our incompetent leadership, the re-emergence of the intolerant Zakarum, and their quarrels with our mage class ... I could go on for pages. It is all too much for one to bear, really."

Following the corruption of the Kurast jungles by Mephisto, the nobles from Kurast migrated to Caldeum to seek sanctuary. Soon, they started demanding their 'rightful' place in the city's trading council and the city underwent a civil war-like state. But, due to the intervention of the charismatic Emperor of the Eastern Kingdoms, Hakkan, the citizens of Caldeum prospered for some time.

The famous author Abd al-Hazir may be native to Caldeum because he frequently refers to it as our fair city.

Caldeum is the focus of Act II of Diablo III where Belial has taken control over the city.