The Bonemancer is a Necromancer build that relies on the use of the various bone skills to provide a potent combination of direct magical damage and defensive utility. This build can be successfully applied to nearly every mode of gameplay: PvM, PvP, Magic Finding, and even Hardcore. The play style of this build is one of a high-damage caster; it dispatches of enemies from afar, preferably without ever entering melee range. The build does not rely on large numbers of summoned minions like some other Necromancer builds, though it is fairly dependent on the Mercenary. As all of the Bonemancer's damage is magic, it does not encounter a great deal of immunities in Hell difficulty, and those monsters that are immune can be easily dealt with through use of Curses and dispatched by the Mercenary. As such, this build is fully capable of soloing Hell. Unlike most Necromancer builds, the Bonemancer lacks a Curse that directly increases his damage, so he instead focuses his curses on crowd control, defense, and utility. This build will typically be completely finished in the mid- to upper-90's, so it will require some dedication to finish, though it is completely viable before the build is fully completed. 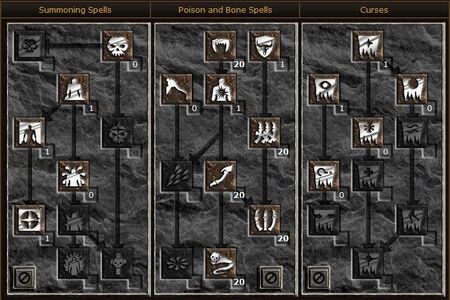 The Pure Bonemancer will invest all of his skill points to increasing the damage of his spells, with little regard for secondary abilities.

As this build is not particularly corpse-dependent, it should make use of the Act 2 Nightmare Defensive Mercenary, who will provide Holy Freeze Aura to slow enemies. 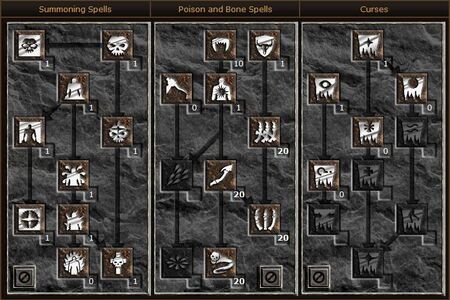 The Bone/Summoner Hybrid will divert some of the points that the Pure Bonemancer uses for synergy boosting to the Summoning Spells tree in order to pick up Revives, which provide relatively minor damage, but, more importantly, make very useful damage sponges to tank for the Necromancer.

All other spells should follow the same template as the Pure Bonemancer.

Curse selection for this build will be the same as that of the Pure Bonemancer.

As this variant is significantly more corpse-dependent than the Pure Bonemancer, a Holy Freeze merc is not particularly desirable. I prefer to use a Might Mercenary (Act 2 Nightmare Offensive) to provide an extra damage boost to my revives.

For either build, skill placement should follow these general guidelines: