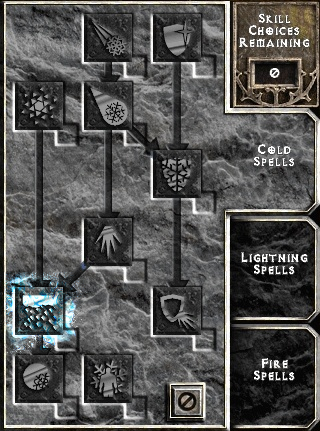 Blizzard is arguably one of the best Area of Effect spells that the Sorceress has to offer, with its freezing effect, high Cold-based damage, and multiple hits. This skill quickly becomes a primary employment for Cold Spells Sorceresses taking on large groups of monsters at once.

This is the most effective offensive spell that this discipline has to offer. With the invocation of this spell, entire hordes of enemies are left frozen or dead, drowned in a hail of ice. Wretched survivors of this wintry storm can do little but crawl and lament their fallen kin before they, too, succumb to the cold.[1]

A Blizzard-based Sorceress can be a good choice of starting character if starting in the wake of a Ladder Reset or if you're particularly poor. They're easy to get up and running, as they do not *require* as good of gear as other builds in order to be efficient, and they make excellent boss runners, as Blizzard not only slows, but also hits multiple times at once. Slowing down an enemy with Blizzard and then spamming the monster with Ice Blast while you're waiting for the cool-down period for Blizzard to time out is a very effective way of taking down enemies and bosses.