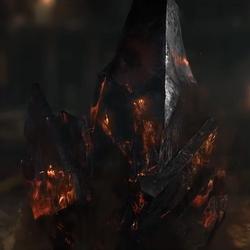 The Black Soulstone is an artifact of incredible power. Although few specifics are known about the origin or nature of the Black Soulstone, it has been confirmed in the Blizzcon 2011 Lore Panel that Leah possesses it and intends to use it to trap both Azmodan and Belial.

Unfortunately, Azmodan is keenly aware of the Black Soulstone's powers - along with the fact that it is in Leah's possession - and intends to obtain the artifact and use it toward his own ends. In the Black Soulstone Cinematic, Azmodan tells Leah, in a vision, "I know the Black Soulstone is the key, and it shall be mine! Soon, my armies shall pour forth from the shattered mountain, ravaging this world and all hope of resistance. My minions will find the Stone, wherever you choose to hide it. Then, at long last, Azmodan shall reign as the Prime Evil."

When the Horadrim was new, it was formed by only a handful of members, among them Tal Rasha, Jered Cain and a mage by the name of Zoltun Kulle. Though records since the time of the hunt for the Three are hard to come by, it is speculated that Kulle specialized in enchantments and transmutation. He was charged with carrying the Soul Stones meant to imprison the Prime Evils.

After the arduous, decade-long task was complete, Kulle was left a hollow man. He devised a means of restoring his humanity by forging a Black Soulstone with which he planned to harness the essence of angels and demons. Before his plan was enacted, however, he was slain by his former Horadric colleages, and all his research was destroyed.

During the events of Diablo III, after you find out that Adria is still alive and rescue her, she tells that The Black Soulstone can be used to trap the remaining Lesser Evils: Belial and Azmodan, and that it was hidden by Zoltun Kulle, but there still is a chance to find it. You find Zoltun Kulle's head, and in the meantime, Adria taught Leah how to control her powers, and she was able to summon Zoltun Kulle's soul. He says that you must find two vials of his blood, which you proceed to seek. After completing all the challenges and resurrecting Zoltun Kulle, he tries to use The Black Soulstone to make him a god, but he can't because there were 5 Evils trapped in there. After you kill him, you take the Black Soulstone and continue to hunt Belial, capturing his soul. Meanwhile, Leah continues her uncle's studies, and she was attracted by The Black Soulstone. After staring at it for a few seconds, she gets contacted by Azmodan, which tells her that The Black Soulstone will be his, and that his armies are on his way to Bastion's Keep. Luckily, Tyrael appears and takes Leah out of the illusion. After successfully repelling the assault and reaching Azmodan, you capture his soul. You return to Bastion's Keep, but something bad happens: Adria betrayed you, and is transferring Diablo's now empowered with all the other Evils soul to Leah. Diablo praises Adria for her hard work, and proceeds to assault the High Heavens. After you defeat Diablo, he is seen dissipating into the wind as he falls from the High Heavens, with the Black Soulstone falling shortly behind him.