"...Never before have I been struck with such dismay as when standing upon the ramparts of the ancient fortress of Bastion's Keep. I came to see firsthand the barbarians, those near-legendary, immense, relentless, dual-wielding furies of combat dwelling upon their sacred Mount Arreat." - Abd al-Hazir 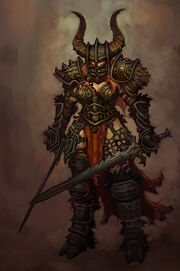 Concept art of the female Barb

After the destruction of the Worldstone, the noble Barbarian race suffered a loss to their morale; their very purpose for living was stripped from them. Looking to reclaim their glory and hopes for a warrior's death, the Barbarians have left the destroyed Mount Arreat to reclaim their pride and respect.

"In my journey to catalogue the various denizens, civilizations, and fauna of our world, I have traveled far and wide, but never before have I been struck with such dismay as when standing upon the ramparts of the ancient fortress of Bastion's Keep. I came to see firsthand the barbarians, those near-legendary, immense, relentless, dual-wielding furies of combat dwelling upon their sacred Mount Arreat.

Instead, I stand here looking at a mountain that has been torn asunder by some extraordinary force. The sight, I must confess, is incomprehensible. Yet what I see before me cannot be denied.

What truly happened here? Where are those majestic warriors of old? Though they were once misunderstood as simple, bloodthirsty invaders, the long and noble history of these proud people is now rightly acknowledged. And therein lies the greater tragedy here, for those of us familiar with the nobility of the barbarians remember too what they call their "vigil", the concept that lay at the very heart of their culture. The barbarians consider it their sworn duty to protect Mount Arreat and the mysterious object within. They believe that if they fail to uphold their duty to the great mount, or are not given a proper burial upon its slopes, they will be denied a true warrior's death, and their spirits shall roam the land without honor for all eternity.

If there are any barbarians left alive, they must truly be without hope. Perhaps this is the genesis of the rumors of monstrous things reported to resemble the barbarians in size and ferocity, but that are in reality nothing more than unreasoning, inhuman beasts. Could the destruction of not only their home but also their very beliefs have actually brought this magnificent race so low? - Abd al-Hazir"

Steeped in mystery and tradition, these people refer to themselves as the "Children of Bul-Kathos," the great and ancient king. To better protect their lands from outside forces, they adopted a nomadic lifestyle, frequently moving within the confines of the Steppes and maintaining few permanent settlements. Isolating themselves from the world outside their territories, they eschew the use of magics and complex machinery, as they believe these things can only weaken their resolve developed over so many years.

The Children of Bul-Kathos have developed a kinship with the land and have learned to harness the primal energies within nature to enhance their own substantial physical prowess. It is because of this, together with their freedom from the trappings of the outside world, that the Western Kingdoms have historically referred to these tribes as "Barbarians," an epithet that belies the rich cultural and spiritual history these people truly possess. Although some trade with these curious bands of nomads, they do so only along the outermost borders of their lands. All intrusions into the territory surrounding Mount Arreat are forbidden, and warriors from the northern tribes are quick to thwart any incursions. Every foreign attempt at conquest has been met with fierce and decisive resistance.

An account of one skirmish recounts how hordes of Barbarian tribesmen silently appeared where none had been but moments before. Their bodies painted in mysterious designs and their faces howling as they charged like the fierce mountain winds, the tribesmen descended on the invaders. Fully half of the trespassing army immediately dropped their weapons and fled, the remainder were set upon by the Northmen with fervor that none of the battle-hardened invaders had ever witnessed. No mercy was asked and none was given, but in the end, when the outlanders sounded a full retreat, no chase was given either… at least none that could be observed.

Since news of Diablo's re-emergence has spread, a small number of Barbarian warriors have begun roving the lands outside the Steppes, prepared for war and seeking information regarding the recent activities of the Prime Evils.

Renowned for their awesome combat prowess as well as their arrogant demeanor, the Barbarians appear to be perpetually girt for battle. Through harsh conditioning, the Barbarians excel in physical combat and tremendous feats of strength. They derive their power chiefly through intense physical training, but they also tap primal energies from the living world around them. They can manifest these or add to their already considerable catalogue of superhuman feats of strength and power.[3]

The Barbarian was first announced at the 2008 WWI, when Diablo III itself was revealed. Shown in the very first gameplay video for the game, this familiar Hero sparked nostalgia in many fans. However, the original concept of the Barbarian was not the returning Hero from Diablo II. Blizzard had originally designed D3's Barbarian as new and unique character to the franchise. However, while developing him, they found that he had too much in common with the older version. Choosing to stick with their development of the class, they opted to change the concept instead, making the Barbarian the only character to return as a playable class.

Another change that occurred during the development of the Barbarian was the switching of his resource from Mana to Fury. The development team thought that a resource which was obtained by being in the thick of the battle fit the Barbarian much better than Mana. While the specific mechanics of gaining Fury - hitting and being hit in battle - has not changed, the resource UI has undergone significant iteration, starting as a three-ball system, eventually changing to a ring, and, currently, to a pool.