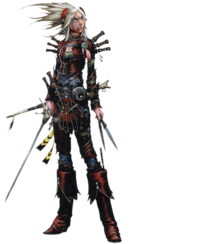 Assassins are cold-blooded killers, they use both magic and melee weapons. They have the ability to identify magical items. Assassins don't care about how they kill, they simply love the act of killing. Their magical abilities are second to Mages', they can (and usually do!) wield two weapons at once, but definitely benefit more from using swords and sword-like weapons. They tend to use weapons that require more dexterity. They strike quickly and powerfully when wielding two swords and it makes them a very dangerous opponent for monsters. Besides, they tend to concentrate on the weak spots of their enemy's defense and cause tremendous critical damage, sometimes instantly killing the enemy. But they have even less stamina then Monks and rely on their armor and agility more than on their ability to endure damage. Their defense potential is decent and approaches that of Gladiators', but Assassins tend to use armor types that require more dexterity than strength. Often, they weaken their enemy from a distance and finish him off in hand to hand combat, They exult in the act of killing.

Stats to focus on, in order of importance: DEX, MAG, STR, VIT