Achievements are a set of made up goals designed to mark the progress of a player through the game or provide extra challenges. The rewards from achievements in Diablo 3 are purely cosmetic, allowing players to show off their accomplishments to other players. Achievements also affect the appearance of the player's Banner with various decorative options being unlocked per achievement.[1] The achievements menu can be accessed from the shield icon. 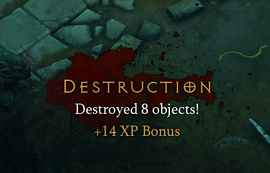 Some achievements grant an immediate bonus to experience and will always trigger if the minimum number is reached. The amount of experience granted scales with the magnitude of consecutive things killed or destroyed:

(bonuses that require monsters to be killed only grant XP if the monsters would normally give XP. Eg: monsters that infinitely spawn or monsters that were indirectly killed without being "tagged", do not give XP)